Traipsing through Mayfair’s Berkeley Square during a late summer downpour, one just wishes to escape the dross and find sanctuary in warm and inviting comfort. A wet hop down nearby Charles Street and a charmingly immaculate brass plate indicates I’ve found it. Marcus Lecky Oswald Hornby Birley, Old Etonian and King of London’s private clubbage – opened the eponymous Mark’s Club in 1973 in a grand Georgian townhouse.

Birley was a conduit of effortless style and glamour, having launched his career in hospitality nearby with St.James’ most famous club, Annabel’s a decade before. Breaking the tradition of single-sex gentlemen’s clubs, this son of a society painter had his own legendary vital eye for details. He is said to have refused to have the brass pillars at Annabel’s coated in lacquer to stop them tarnishing because he thought it would make them look ‘too harsh’; so for 37 years someone has been employed to get the Brasso out and rub hard (Derek and Clive fans, look away now). Its current owner, Richard Caring, snapped up the coveted Birley Group (which also includes Harry’s Bar) for a reported £95 million, shortly before Birley died, aged 77.

Mark’s was shuttered in early 2015 and rose, Phoenix-like, from some none too shabby ashes some months later. A dynastic contretemp had lead Papa Birley to break with his son, Robin in 2006, shortly before he passed. Robin, who had been running the empire for his father, went on to create the highly rated 5.Hertford St with its celebrated, sumptuous nightclub, Loulou’s, in the basement. This dynamic reworking of an old formula may have lead to Caring’s rethink and restructure. The membership list was wiped clean and old timers had to reapply. The sole criteria: were you ‘interesting’ enough. 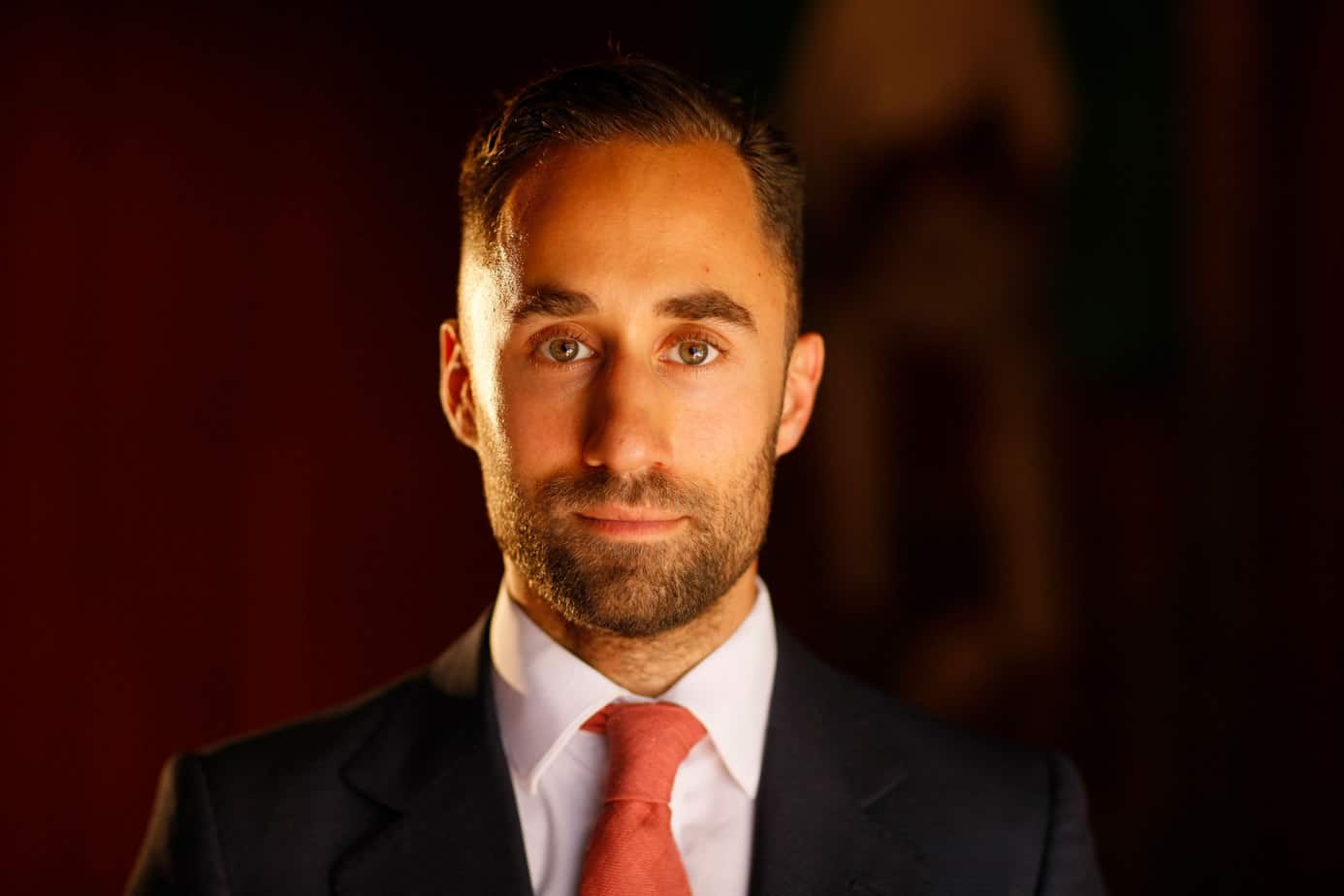 Luckily, he had an ace up his sleeve. Darius Namdar was already a celebrated figure in London hospitality, having started at The Wolseley before opening Chiltern Firehouse as their head Maitre d’Hotel. He took the same position at Jeremy king’s Mayfair’s Beaumont Hotel, where he managed and developed the customer base and hospitality teams. Becoming Director at Mark’s Club in 2015, he has overseen the refurbishment by Parisian interior designer, Tino Zervudachi and is now leading the exceptional service the new and gratefully reinstated members have come to expect.

Aiming to further raise the level of rarified hedonic pleasure, other elements have been introduced. Not content to be merely London’s most well-groomed and well-connected Maitre d’Hotel with a little black book to match, Darius gained the prestigious ‘Master of Havana Cigars’ accolade, known as the ‘Higher Certificate’. This makes him a Don of the Stogie world. The award is given to very few, with currently only 30 titleholders, presented by Hunters & Frankau. Darius’ knowledge enables him to offer Mark’s Club Members the very best cigars to suit their taste, selected from a special-designed grand humidor that takes pride of place in the club’s Drawing Room.

I sit down with the Master himself in the bright heated conservatory that allows Mark’s puffing clientele the opportunity to savour the aroma without breaking any health and safety bylaws. The rain delicately pelts the glass as elegant 1930’s jazz competes for our aural attention.

Darius brings out a sumptuous Cuban Punch 48, in honour of the bound editions of 1870’s Punch magazine editions that line the cabinet’s book shelves.

Impressively suited and groomed, the Master talks in an engaging and friendly manner – this is someone who knows how to host. He reverentially peels off the cap for me and lights the tip as a mother delicately washes her newborn’s eyes, I ask why a suave and urbane young man would be drawn to the delights of, well, drawing smoke.

‘As a kid, my dad always had a puff in his hand. Whether it was an unfiltered Gitanes or a big, smoldering Cohiba. I just always remember being surrounded by that wonderfully evocative smell of good smoke. Obviously, a cigar is a big sensory overload product. That smell is quite consuming, so any time I smell cigar smoke on someone, I’m sort of instantly drawn to them,’ he smiles. I point out that the olfactoral sense is the greatest link to memory.

‘Well, yes. It’s almost Proustian. I have very good memories associated with my dad through his cigars.’

Was there an existing cigar offering at the club before the relaunch?

We had a cigar collection, sure, but it we knew it could be very much improved upon. We needed to make this beautiful humidor and I needed to learn a lot more about this world. There’s a romanticism and an allure that I hadn’t realised I was so drawn to. I knew a few of the names, but that was a scratch on the surface so I dived headfirst into it all.
I took the higher certificate with Hunters, which took a good few months. Now there are 35 Masters of Havana cigars based in the U.K. alone.’

Do you see yourself as an ambassador for the cigar business?

‘It’s really quite small industry – there’s only 26 brands available on the market, but with this vast array of sizes and special additions. Of course there’s a load of romanticism around Cuba and its culture. And that is, to a large extent, based in fact. What people don’t realise is the technical, ‘trainspotter stuff’ – that the flavours come from a certain maturation process that goes through various stage, for example. Different cigars have different intensities due to the level of their maturation time. A Cohiba or a Bolivar will have quite strong flavours due to higher levels of tannin in the leaf. A Hoya de Monterey will be significantly more delicate.’

There is a group of us all of a similar age who are expanding this area of cigar expertise. There is Greg at Dunhill – we did our Masters exam at the same time – and Manuel at the Arts Club, Luis over at Hertford Street. We are all interested in the ageing, the size and the science behind it. We really appreciate the difference in the cigars – for us it’s beyond the mere image of a man looking powerful or masculine. There is so much effort that has gone into creating one of these things and that’s what leads to more knowledge. It’s a very generous world, we are all sharing information with each other. My friends pass around obscure and limited examples, which we’ll smoke at the weekend in casual clothes over a good bottle of wine. It’s a nice community.’

So how did you escape the world of finance for…all this?

‘About five years ago, I made the decision that I really needed to do something I actually loved. I thought that the title ‘Maitre’d’ was merely honorific and just given to the waiter who had been there the longest. Someone said go talk to Jeremy King and so I went and sat in Colbert and waited for him to show up. Eventually he came in and after a chat, he gave me my first break at the Wolseley.’

Did that prepare you for the impact of launching the Chiltern Firehouse?

‘None of us at the Firehouse had any idea how quickly the place would take off – it was a very surreal first year. I was still quite new to the industry at this point and I’ve never seen a restaurant that popular in London in my lifetime. Maybe the Ivy would be the closest? The biggest names would come to London and descend upon Chiltern Firehouse so, of course, I loved it. Then Jeremy contacted me regarding an opportunity to assist with the opening of The Beaumont hotel – so this became my second opening in two years. He is my mentor and inspiration and so I was happy to be back in the fold.’

And now you’re here. Does it feel like you’ve found your niche?

‘When this place approached me I knew it was the moment I’d been waiting for to finally become a GM. It’s an amazing place. On any given night the clientele here at the club makes for a fascinating mixture. We have the traditional membership – predominantly English and mainly involved in business, but then using my contacts from the Chiltern Firehouse, I invited people from the film industry and the music industry, artists and designers, actors and other creatives.
Mayfair wasn’t on the map and many of the new members didn’t even know this place existed.
I think the relaunch of Annabel’s it’s going to be spectacular. Birley totally re-wrote the book in 1963 and I think they’re going to do it again – it’s amazing. We have an amazing committee who pool their knowledge of potential new members across all the clubs in the group.
I think what we’re building here is unique.’

And with that, the glow of the Punch beginning to wane and the rain beginning to pelt the conservatory’s glass a bit harder, I am required to leave the warm embrace of Mark’s Club and go back to quotidian life in puddle-filled London. Sometimes the only way to make The Smoke more appealing is to know where to get a really appealing smoke.

Robert Clayman, Lusso's Editor, has put his word brains to good use for major advertising campaigns, BBC radio, Sky TV and feature pieces for Esquire and other titles.