Petit St Vincent. 40 miles south of St. Vincent in the Grenadines, it’s one of the most luxurious private islands money can buy, a tranquil paradise of long sandy beaches and clear blue skies – and it’s where Lusso sent me for a few days of top rest and relaxation, in order to report back on everything this cushty resort has to offer.

I’ll be honest with you – I didn’t know too much about this journalism lark before I set off on holiday. I do know about standing still on a stage, telling jokes for a living. I also do the same job sitting behind a prop desk on television. It’s a bloody great job, but staring at Dara O’Brien or Jimmy Carr’s mush isn’t exactly on anyone’s bucket list. Sorry, chaps. 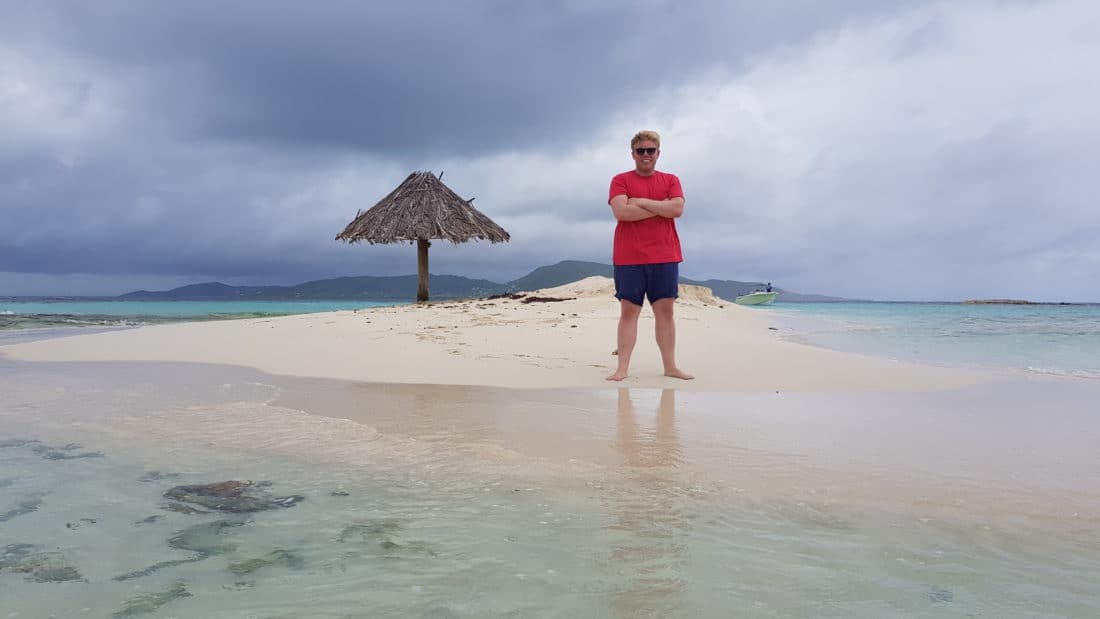 That said, kicking off my career as a man of letters by hanging out on a lovely private island didn’t seem like the kind of assignment that would give me too much trouble. Granted, it may not win me any journalism awards (such as ‘Phone Hacker of the Year’ and ‘Least Unbiased Footie Writer in a Major Tabloid’) but at least there’d be sun, sea, surf and rum, and that’s a prize in itself. Not a proper prize with a big cash reward and a trophy with a bloke playing crown green bowls on it, but a prize anyway.

Now, just so you know I’m taking my journalism duties seriously, I did a bit of research before I headed off, and here’s what I found in the first two results on Google. Petit St Vincent (or Little St Vincent for anyone who didn’t pass their French GCSEs) is regularly voted one of the best luxury resorts in the world by a bunch of magazines I don’t read.

It’s 115 acres in size, and has 22 cottages and villas dotted all over the place, most of them set on the seashore. It’s got a couple of restaurants (one by the beach), a treetop spa (where I had a lovely massage, thank you very much), and a diving school owned by Jean-Michel Cousteau, son of the legendary diving fella, Jacques.

There’s a massive wine cellar with over 50 grand’s worth of wine (which is so fancy, it features all three colours – red, white AND pink), a staff of 130 to cater to your every whim (including a legend called Glenroy who was so relaxed, he was the human equivalent of a hammock) and you can rent the whole place for a minimum of $27,200 a night with a minimum of four nights. Which Lusso were doing for me, meaning I was going to have all these top things to myself. It’s a hard life…

To get to PSV (as I’m going to call it from now on, to save my beautiful and strangely sensual fingers from the terror of RSI), I caught a Virgin flight from Gatwick to Grantley Adams in Barbados, then a tiny Air Mustique four-passenger plane from Barbados to Union Island which flew through a rainbow (which I’d much rather have seen from the ground. I’ll be honest, it was pretty terrifying when the plane got knocked about in an air pocket, but because I’m tough, I hardly screamed at all) and finally a private boat from Union to PSV.

I arrived just as the sun was setting and was met by Matt Semark, the manager of the island, who was dressed in white linens like the man from Del Monte gone Caribbean, and who was standing on the dock waiting for me with not orange juice but a daiquiri in hand. Pretty sweet. It was too dark to go on a proper tour of the place, but I could feel the warmth in the night air, like some kind of sexy nocturnal hairdryer, and the sand under my feet, like some kind of, um, sexy nocturnal sand, so I could sense this place was going to be a bit of alright. I hit the sack in my gorgeous beachside villa (five stars and counting, with all mod cons, including proper air conditioning to stop my hair going curly in the heat, a fridge stocked with local beer, and even a jar filled with cookies – they’ve thought of everything out in paradise), and caught some shut-eye, ready to storm the island once the sun was up.

Next morning, Matt took me on a tour of PSV in his Mini Moke, the perfect vehicle to get around the island’s winding pathways. We were like a crime-fighting duo, heading out into the wilds in our crazy vehicle, ready to bust some baddies. Not that you’d find any baddies on the island, only fellow billionaires (who might not have made their money through strictly legit means, to be fair, so there’s always that).

There’s no internet on the island, other than by the bar, nor is there TV (luckily, I’d brought plenty of copies of Lusso for night time reading – brilliant magazine, best ever, love it, can I have some more money and go on another swank trip soon please?), and in order to get room service, you use a flag – put your flag up, and one of the 130 staff members will spot it and come by to see what you need. Only place I’ve ever had to bag a butler by semaphore – don’t get that in Majorca, not at the resorts I normally take the family to, anyway, and we go to the top end of the Thomas Cook range because I’m doing alright.

Then again, who cares about crazy flag-waving systems for ordering an in-room hamburger when you’ve got such a beautiful place as this? The sky was clear, the sand was warm and little crabs popped out of the sand and darted around in front of us everywhere we went, tiny scuttling show-off bastards. Apparently this place is beloved by celebs (proper Hollywood ones, not just me), because it seems this place is pap free and Matt can get you literally anything even though we’re miles from anywhere. I asked what some of the outrageous demands he’d been asked for in the past – apparently he’s rustled up everything from turtle doves to rare sea turtles to keep the rich patrons happy. Still, I reckoned paradise couldn’t offer everything – so I had a bet with Matt. If he could bring me a KFC bucket, PSV would definitely be the best place on the planet. A boy can dream, can’t he?

Anyway, back to the tough journalism lark. Once Matt had given me a tour of the island, showing off the diving school and the hillside restaurant where I’d be having dinner (like the world’s greatest Harvester, it served surf, turf AND crème brûlée most nights), it was time to get down to business – sunning myself by the water. I grabbed myself a beer from Goatie’s Bar on the beach (Goatie being the fella who runs the bar, and who helped build the resort back in 1966), and prepared myself for some proper relaxation.

And how better to relax than with some quality rum? Turns out this area is swimming in the stuff (not literally, that would make going out for a morning dip a little bit tricky – you’d be pissed before you’d made it 10 feet out), and in the interests of doing some proper investigative reportage, I thought I should try every single one. I only had four days, so I jumped straight in. Peter the bartender rustled up some lovely local rums – I tested a Mount Gay XO and a rather nice Captain Bligh, but I’d heard of them. What I needed was a rum worthy of a Lusso reader.

So Peter pointed me in the direction of a rum so strong you can’t even fly with it because it will blow up the plane – Sunset Very Strong Rum. 84.5% alcohol and did I just mention, IT’LL BLOW UP A PLANE?! Anyway, it tastes like paint stripper and it nearly blinded me. Luckily there was a full English fry up waiting for me on my beachside patio when I finally opened my bleary but thankfully still seeing eyes next the morning. What service!

With the hard work of rum tasting out the way, it was time to get back to the meat and potatoes of my assignment – relaxing! To make sure I wasn’t bothered with any phone calls from my editor back in London, asking me to do some proper work, I headed out to an even more private island. Nearby Mopion is a reef with nothing but golden sands and one wooden umbrella, the perfect place to escape to when even paradise is a bit too full on. For the next few hours, I became a real-life Robinson Crusoe, just me, myself and I kicking back and loving this little slice of heaven. Eventually, though, it was time to head back to PSV to file my report, like the brand-new Alan Whicker that I was becoming. Whicker with an edge, that is. Street Whicker!

I sat at the bar by the restaurant, jotting down notes, remembering everything that had happened over the past couple of days (except for that tricky moment after I’d tested the Sunset and couldn’t remember the next 12 hours, nor my name, nor the birth of my first kid). And then, as if by magic, a four-piece steel band turned up, playing just for me all classic hits on the steel drums – Hotel California, One Love, the theme tune to ‘Auf Wiedersehen Pet’ (probably – the rum is still messing with my memory). What a beautiful way to get some top-quality journalism done – eat your heart out Piers Morgan! (No. Really. Eat your own heart out please, Piers Morgan. Ed)

I’d toured paradise, drunk rum, and got down the nuts and bolts of this incredible place. And then, as I sat down for my final meal of some freshly grilled lobster and lamb chops down on the beach with my own personal chef, Matt turned up, silver platter in hand. And what was on it? Only a blooming KFC bucket! I have no idea where he’d got it from, considering we were hundreds of miles from anything approaching a KFC, let alone a Chicken Cottage, but he’d done it. What a man! And what a way to spend a final night. Lobster, lamb chops and fried chicken as the waves lapped against the beach – bosh, you don’t get that in Southend-on-Sea (apart from the fried chicken, obviously. And the waves and I suppose something that resembles a beach).

Health isn’t a luxury. Wellness is.

One More Reason to Visit the Maldives? Oh, Go On Then

Around The World In Eighteen Days

The York and Albany Hotel, London