You cannot launch a boat, get married, have a child or celebrate without champagne. Not properly, anyway. And so it seems that you can’t race a car – or win a race – without a good hearty bottle of the proper stuff. And that extends also to Formula E. The auto racing of the future witnessed in Paris this April the Formula E Visa Paris ePrix with one of its sponsors, Mumm Champagne showcasing a new bottle design. Two twists on beloved classics highlighted what was one of the best races of the Formula E season so far. 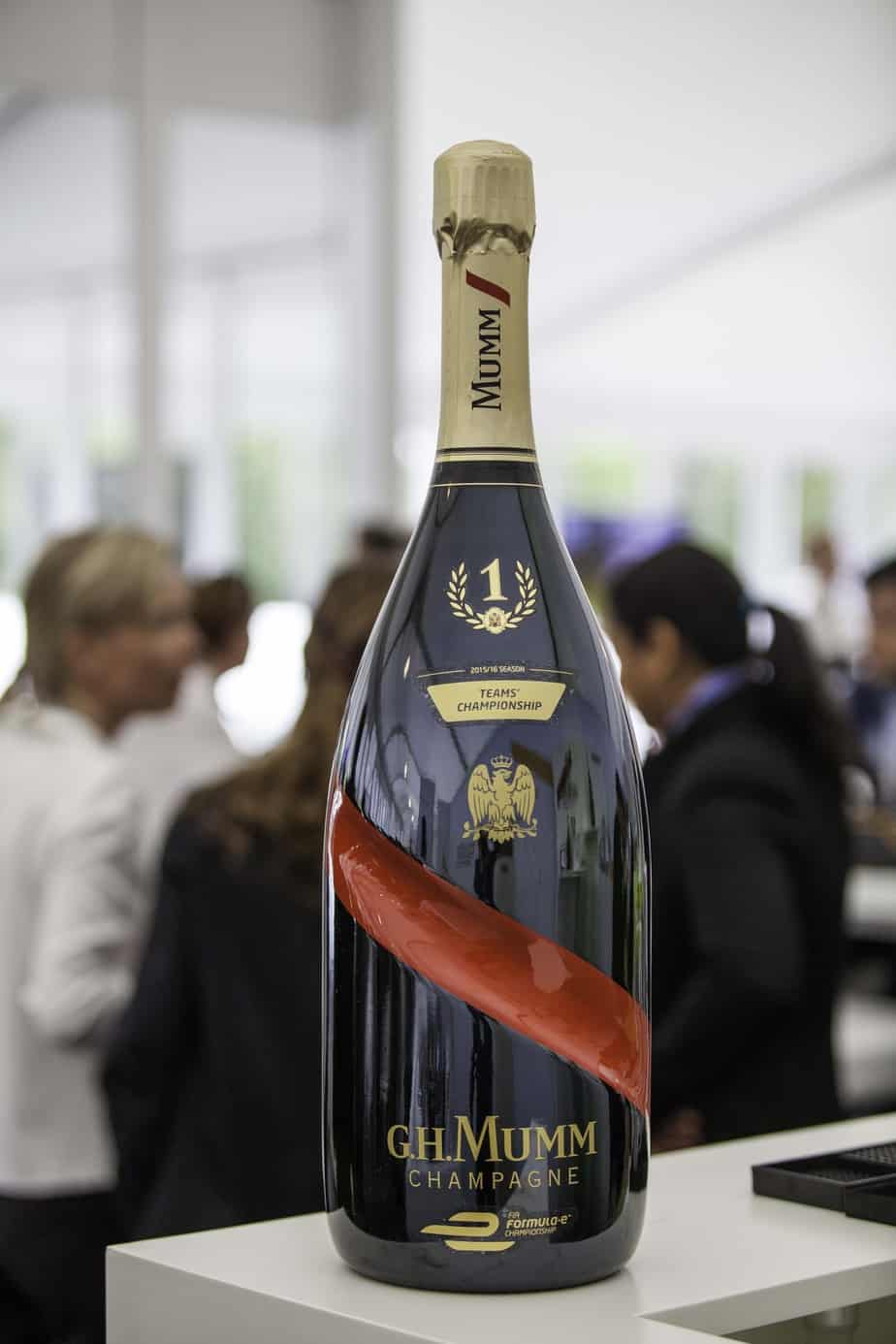 E racing went from concept to reality in two short years, starting in Beijing 2014 and meeting fixtures around the world. The FIA Formula Championship was conceived by FIA president Jean Todt to showcase the power and excitement of electric vehicles and expand the range of motor racing into something new. Racegoers have embraced this new twist too; Parisian tickets to the event were sold out immediately. There is a lot to like: not only are the cars chic and sleek, they’re also quiet, churning out 80db, which is about the same noise level as an ordinary car running 70mph. The cars themselves are futuristically streamlined in appearance; nimble and very suitable for racing around the beautiful city of lights – a city that claims to be the foundation of motorcar racing while also being the home to the FIA.

Without the ear-splitting screams of an ordinary engine and the reek of fumes in the pit, Formula E may lack the brutal excitement of Formula 1 but if electric racing seems ho-hum, the idea of sustainability throws that into the shadows. With the waning of fossil fuel and wasteful technologies in a rapidly shrinking world of resources, Formula E may very well take over from the guzzling machines of yore to continue to give audiences and enthusiasts the thrills of expert driving, high-precision driving machines and the threat of danger and speed. The races are typically run on city-centre circuits in capitals around the globe, providing a hub of entertainment and heaps of opportunities for audiences to see whole parts of the race, the excitement and the surrounding carnival atmosphere. Formula E proves that looking after the environment need not be boring. It proves you can race a relatively fast car – top speed 140 mph with a minimum of 250hp – through tight city chicanes and not pollute the environment with noise or exhaust. Greener cities do not mean a lack of fun – Formula E shows that both can go hand in hand.

For the Paris ePrix, Mumm Champagne, a long time sponsor of Formula 1, produced a new bottle design for the hospitality market. Ross Lovegrove, the influential Welsh industrial designer who also collaborated with Mumm to produce a limited-edition champagne saber, reinvented the brand’s iconic Cordon Rouge red sash. It’s a cunning design that tricks the eye into thinking the bottle is the same traditional red-ribboned bottle that makes Mumm stand out from the others. Instead, the sash is cut into the bottle itself, creating a tactile groove that spirals down the bottle. The white label is gone with a signature and the eagle emblem on the glass, printed directly in gold. It is an enormous yet subtle innovation in the 189-year old story of Maison Mumm.

Lovegrove’s work has been seen in influential venues such as the Museum of Modern Art (MoMA) and the Guggenheim Museum in New York as well as the Centre Pompidou in Paris. Walkmans for Sony and Apple computers have also been touched by his genius. But it is the simple magic of his design for Mumm Champagne that makes it so astonishing to see. It’s the kind of bottle you don’t want to recycle, and it’s beauty adds to the old phrase, first introduced in 1900, “Mumm’s the word.” With this association with Formula E and the new bottle design, that advertising slogan seems more apt than ever.

Karen Krizanovich is a journalist, writer, researcher and broadcaster based in London, Glasgow and Chicago. She studied philosophy for seven long dull boring years, later earning an MBA in film finance. Her journalism has been published in The Times, Sunday Times and The Telegraph among many others; TV and radio appearances include Newsnight, CNN, BBC4 Woman’s Hour and The Today Show. She is still occasionally recognised as Dear Karen, the vicious agony aunt of Sky magazine’s back page in the 90s.

Back to the Island – Hotel OD Talamanca, Ibiza

Back In Time For Prohibition Tea