As Scotch whisky reinvents itself, Japan struggles to keep up with demand and the American whiskey scene is like a joyous Spaghetti Western–with strangers and unexpected heroes taking pot shots at the Sheriffs, breaking all the rules and generally having a rootin’ tootin’ time–‘whisky vision’ is suddenly less myopic.

Somewhat less restrained than the Scots who have shouldered the burden of ‘best in class’ by opinionated, self-proclaimed malt masters, the Irish have been more ready and willing to jam their foot on the gas pedal of the Freethinkingmobile. In doing so they have expanded their roster of distilleries and managed to gain a huge amount of traction in a very short amount of time. Their reputation has consequentially grown as a product that has the history and heritage, yet is ready and equipped to capture the imagination of a new generation of whisky drinkers, all the while commanding the respect of the old guard.

St. Patrick’s day has just stumbled past, and hidden in the ragged green cloak amongst the gaudy props and trinkets were some genuine gold nuggets…

Midleton has almost 200 years of distilling history, and produced some of the biggest and highest regarded brands of Irish whiskey, from the revered annual Midleton Very Rare releases through to the steadfast favourite of connoisseurs and clergy alike: the single pot still, Redbreast. This brand in particular has unwaveringly produced some of the most delicious pot stills (the 15 year has long remained a personal go-to), and in keeping with the times has begun to deviate somewhat, releasing ‘Lustau Edition’, a creamy whiskey that is finished in Olorosso casks, giving the already incredible tipple warm marzipan, a hint of zest and a fistful of juicy sultanas on the nose. As would be expected from such a collaboration between the distillery and the sherry bodega, a medley of nuts – almonds, hazelnuts and walnuts – coats the mouth, finishing on a long baked spiced-apple finish.

Not content with riffing on a classic, Midleton has gone a few leaps further, opening a new micro-distillery with the intent of keeping the young blood off their iPhones and in the mash tun. I jest – naturally the next generation of master distillers and coopers they hire are extremely passionate about a career that is less a job and more a lifelong commitment – but to really shake things up the new Method and Madness range is an opportunity for the new players to show what they will be bringing to the future world of whiskey, by collaborating with their mentors with the spirit of experimentation at heart. 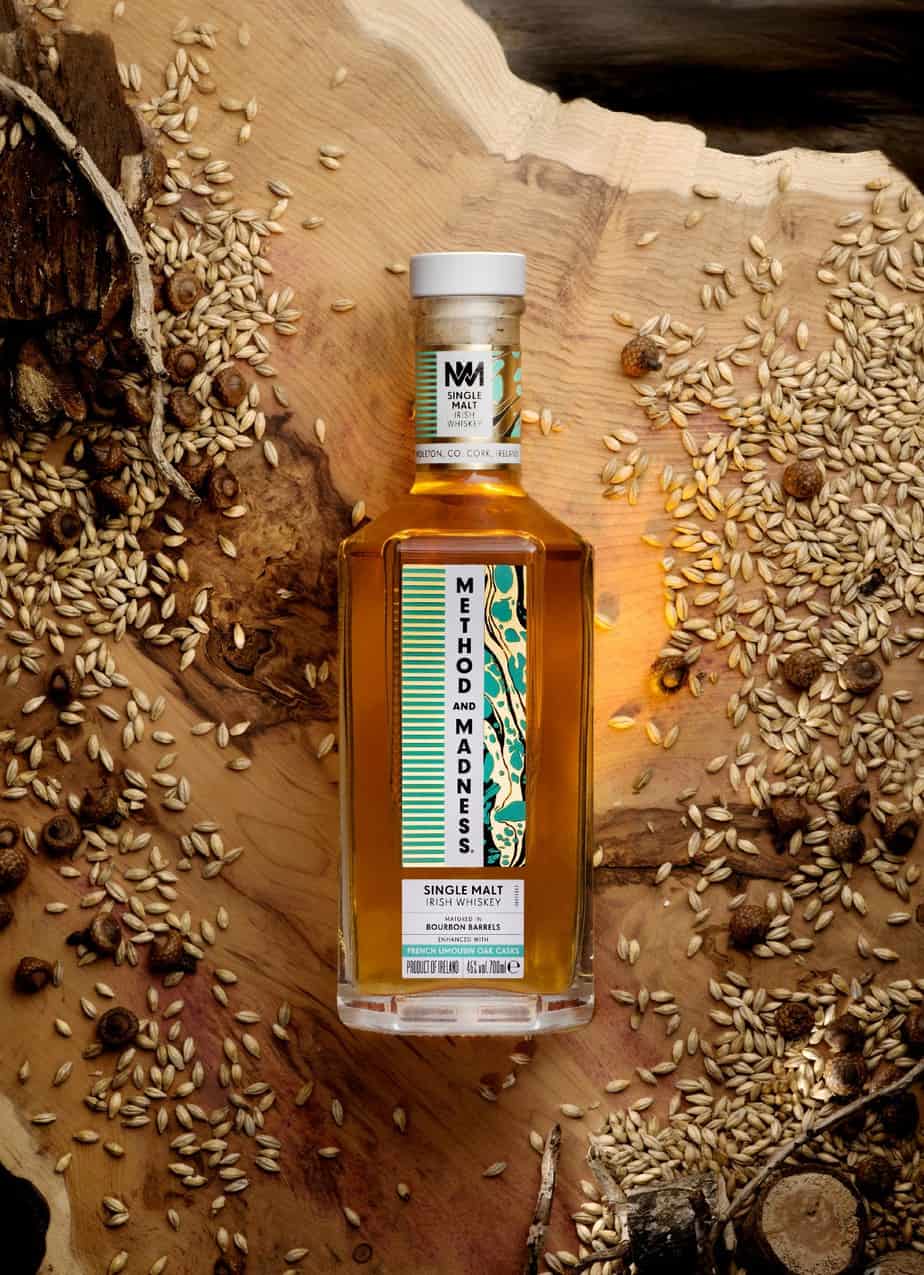 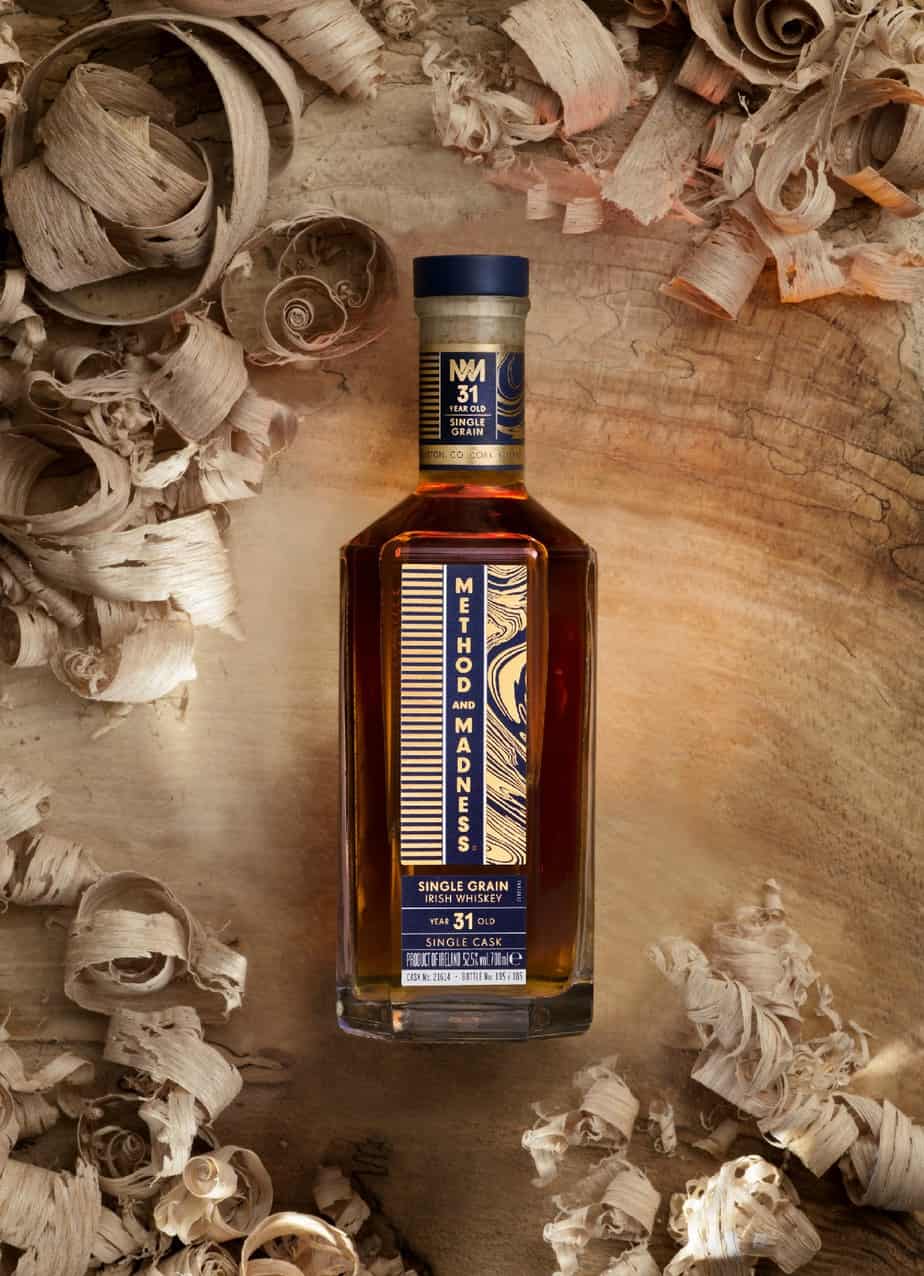 The first four whiskeys to set the benchmark in this ongoing project are very snazzily branded and packaged–they’ve even made some rather delicious mismatched socks to match–with striking geometrical lines contrasted by freeform marbled patterns from Swedish studio M&E, reflecting the youthful experimental side being given equal billing to the conventions of tradition and expertise. But what of the liquids themselves?

Toasted virgin oak from Galacia gives a single grain an aromatic note reminiscent of sun-warmed pine with a floral whisper before finishing on a hefty whack of pithy pink grapefruit zest. A single pot still is matured in a combination of Oloroso and ex-Bourbon barrels before being finished in chestnut casks, resulting in my favourite sipper: big, round flavours of banoffee pie oozing with caramel and a light nutmeg dusting that seem to go on forever. A few Midleton firsts in recent memory are made with a single malt that has been partially finished in French Limousin oak: wood and spice are upstaged by an very unusual contrasts: cantaloupe and peanut butter on the nose, crumbly peanut butter cookies with hints of dried pineapple in the mouth.

No doubt Midleton has a solid method that shines through it’s newest employees, but as to whether giving them the opportunity to shine is ‘madness’ is less evident. As screenwriter Bruce Feirstein said, “The distance between insanity and genius is measured only by success” and judging by their current releases that crock of gold is less than a rainbow away.

Midleton Method and Madness whiskey is stocked at thewhiskyexchange.com.

Award-winning bartender-turned international drinks consultant Julian de Féral has spent eighteen years in the industry honing his skills in some of London's most prestigious watering holes: stirring martinis in renowned members clubs, spritzing spritzers in fine restaurants, blending banging tropicals in Tiki nightclubs, slinging long drinks at arty pop ups and laying down shots in backstreet dive bars. He's represented the UK in many bartending competitions and to date has won over twenty titles. Now heading up the drinks department at the Gorgeous Group he trains bartenders and creates drinks offerings and concepts for projects all over the world, dabbling with words in between.

The Full Stop Lives On

How Merchant House Is Stirring Up the Square Mile

Living In A Gangster’s Paradise

Justin Horne – My Lips are Sealed